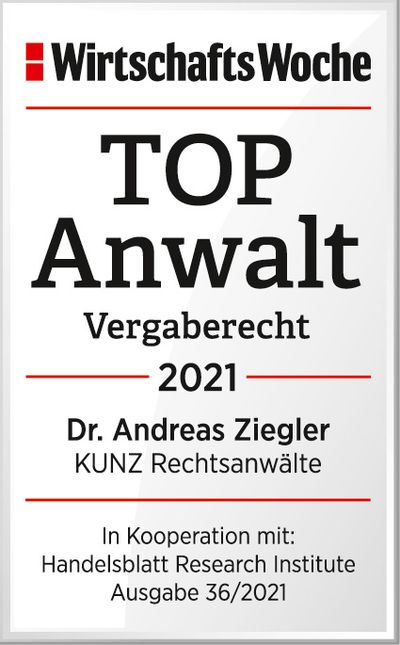 Dr. Ziegler is a partner in our law firm and provides comprehensive advice on public procurement and public corporate law.

In public commercial law, Dr Ziegler provides comprehensive advice on issues of special administrative law, in particular on municipal and planning law issues. One focus of his work is the interface with real estate law. Here, Dr. Ziegler advises on the relevant legal issues relating to real estate, construction and architectural law, as well as the frequently existing references to grant and subsidy law.

Dr. Ziegler began his legal career in 2010 at Kapellmann & Partner. He then worked for many years as a senior associate for Allen & Overy LLP in public procurement and public commercial law before joining PwC Legal in Frankfurt in 2018, where he worked in the public procurement law practice group, most recently as a senior manager. He appears in disputes before review tribunals, administrative and ordinary courts and has extensive experience also in regulatory matters related to real estate transactions, as well as corporate acquisitions and disposals.

continue to next lawyer

IT and Data Protection

We will gladly receive your inquiry. To enable us to answer you as soon as possible, we only need your contact data.